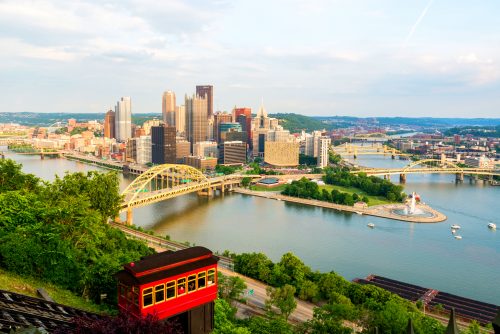 A Brief History of the “Pittsburgh Toilet”

Throughout Allegheny County and the surrounding areas, older homes contain a quirky little secret in their basements. To longtime residents, it might seem perfectly normal. However, newcomers to Pittsburgh might be a little taken aback by the (often working) toilet sitting right out in the open.

Maybe you’ve never given these out-of-place pieces of porcelain a second thought, or maybe you’ve always wondered where these subterranean toilets are doing in an unfinished basement. Just like French fries on sandwiches and parking chairs, the “Pittsburgh toilet” makes our region the special place it is.

Why do Houses in Pittsburgh Have Toilets in the Basement?

These toilets, oftentimes left exposed with no walls around them were a regular fixture in homes built in the early half of the 20th century. They were sometimes even accompanied by simple shower heads that drained right into the floor and a crude sink.

So what’s the deal? These out-in-the-open potties don’t seem like a very accommodating powder room. That’s because they never were. While many homes have since been remodeled, some even converting Pittsburgh toilets into their own bathrooms, many remain just as they were.

The answer lies in Pittsburgh’s industrial past. When millworkers and miners returned home from a hard day’s work, the basement was usually the first point of entry. There, amidst the dirt and grime, they could wash up and take off their dirty clothes before venturing upstairs. Given Pittsburgh’s geography, many homes had basement entrances, meaning absolutely no grime or dirt got tracked into the house.

However, this tale of working class cleanliness might not be the actual reason, or at least not the main reason. There’s another, less appealing reason for the Pittsburgh toilet. In the event of a sewer backup, the basement toilet would be the first one to overflow, meaning all of the dirty water would only spill into the unfinished basement, making cleaning easier. Think of it as a sacrificial toilet. Because it would be the first to overflow, there was a better chance of the main bathroom toilet staying safe and not ruining the main part of the house.

Whether you have your very own Pittsburgh toilet, or you need help with another plumbing issue. We’ve got you covered. Contact us today to get started.