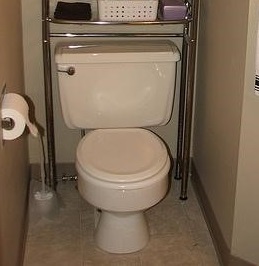 The toilet is one of the most important fixtures in every homeowner or apartment-dweller’s home. Although toilets are frequently sturdy and reliable, it is a rarity for anyone to live their whole lives and never run into trouble with the commode. Though clogging is usually the most basic and easy-to-fix issue, it is far from being the sole common problem. For simple problems such as strange noises or unexplained leaking there are a few simple do-it-yourself remedies to try that may save you from immediately calling in a plumber.

We’ll start with a simple one. Everyone has seen a clogged toilet and felt the panic as the water quickly begins to rise to the top of the bowl without draining. Typically speaking many clogged toilets can be cleared by using a plunger. Before you begin, make sure there’s enough water in the bowl to cover the rubber suction cup. If there’s not enough water in the bowl, fill a pan or pot with water from another source to supply the water that you need. Then begin working the plunger up and down to free the clog. If the plunger action fails to clear out the blockage, never fear! Typically whatever is blocking the toilet is not very far down the pipe. Often times, you can try to hook the clog and pull it free. A wire coat hanger works very well for this.

Though continuously running water is not necessarily harmful to your toilet and does not impede you from using the commode, it can be costing you quite a bit of money in unused water. There are a few simple fixes for most common tank problems, but first it is necessary to determine what part of the tank is causing the issue. To do this, first carefully remove the lid from the tank. Flush the toilet and watch as the float ball drops and then slowly begins to lift as the toilet bowl fills with water. If the water fails to shut off, there is an overflow tube that will drain water into the toilet bowl to prevent leaks. If water is draining from the tank to the bowl, first lift up on the float arm (the long thin arm attached to the float ball) to see if this stops the water. If doing so stops the water from running, you know the problem is that the float ball doesn’t rise high enough. One simple reason could be that the float ball is rubbing up against the sides of the tank. Gently lift the float ball out of the water and GENTLY bend the float arm so the ball no longer touches the sides of the tank.

If All Else Fails, Call For Help

If you’ve tried the simple fixes listed above and none of them are working to solve your toilet troubles it may be time to call in a professional plumbing service. It is important to remember that even though some issues may seem easy to fix, sometimes they may just be signs of a larger problem. If your commode is still giving you trouble, don’t risk a longer term issue, call a professional for help!