When you go to a football game, you probably don’t spend much time thinking about the plumbing. A toilet is a toilet, right?

Wrong! At Terry’s Plumbing, we’re awed by impressive plumbing fixtures and systems, and during football season, we like to reflect on the amazing feat of engineering and design that makes up the plumbing system of an average football stadium.

When you’re building a stadium that holds as many as 69,000 spectators in one event, it’s not enough to simply supply a few bathrooms for all the people inside. Quantity of toilets makes a difference, and in the case of stadium plumbing, quantity can make a lot of difference.

How Many Bathrooms Does It Take to Plumb a Football Stadium?

Think about what happens at halftime. During the break, everyone in their seats will stand up to buy food and (of course) rush to the bathroom. In a stadium holding 69,000 people, that means a lot of people may end up going to the bathroom all at once.

Getting A Thousand Toilets to Work Together, All At Once 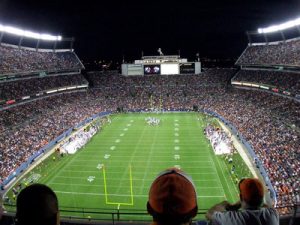 It’s not enough to provide 1,000 lavatories, because these facilities have to work together in tandem. Again, think of those stadium bathrooms at half time. All toilets need to have enough flushing power to work at once, while the sinks need to have enough water pressure to allow thousands of fans to wash their hands quickly and efficiently.

The M&T Bank Stadium opened its doors to the happy sports fans of Baltimore almost 20 years ago, but before the stadium could be declared ready for business, the plumbing facilities needed to be tested. How do you properly test the plumbing in a brand new 69,000 seat stadium? You get a lot of volunteers. 1,000 volunteers were invited to flush the toilets in the stadium all at once. No joke. You can read about it here in the Baltimore Sun article.

The test was a success, and the stadium is operational. At Terry’s Plumbing, we’re truly amazed by the kind of ingenuity and hard work that must be put into a football stadium plumbing system. All pipes, toilets and faucets are state of the art. Everything is designed to work together, seamlessly.

Seamless operation is how we like to see plumbing functioning all over the city of Pittsburgh. At Terry’s Plumbing, it’s our mission to make your home’s plumbing as tough and impressive as the stadium toilets at Heinz Field. For plumbing repair and installation in Pittsburgh, call Terry’s Plumbing at (412) 364-9114.