How To Stop A Toilet From Hissing Like A Snake

A hissing toilet is not at all uncommon and is usually an indication that water is leaking from the tank into the toilet bowl. In many cases, the hissing noise is related to an issue with the parts inside the toilet tank, known as the flush valve assembly. Fortunately, many homeowners are able to fix issues with the flush valve assembly on their own without the help of a handyman or a plumber. 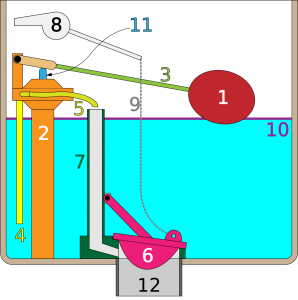 When your toilet flushes, water empties out of the tank and into the bowl, then the tank fills again. The fill valve is what stops the water that is filling the tank when the water has reached the appropriate level. Sometimes, when the fill valve is not appropriately calibrated, the tank over-fills and water flows from the overflow tube into the toilet bowl.

Sometimes this problem can be fixed by adjusting the fill valve. To adjust the fill valve, start by lifting the lid off the toilet tank. The fill valve will look like a plastic buoy or a ball-cock floating on the surface of the water. If the fill valve is adjusted to a level above the overflow tube, the system will not shut off when the tank fills, and water will drain continuously.

In some cases, cleaning the flap valve will fix the problem.

If the flap valve is clearly old and deteriorated, and cleaning it doesn’t help, the next step is to replace the valve altogether. Flap valves are sold in home improvement stores and are often easy to replace.

If none of these suggestions works, you could be facing a more serious problem. In this case, call a plumber you can trust and explain your issue.