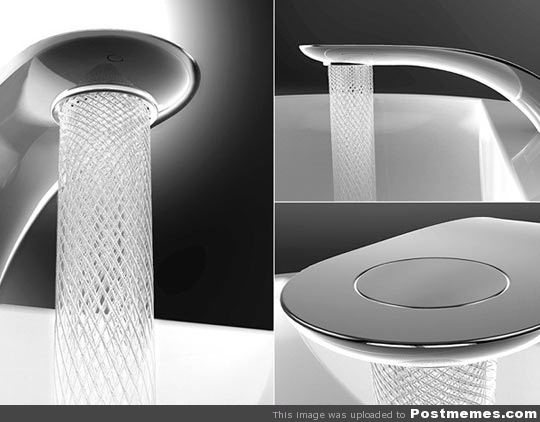 This Swirling Faucet Design Will Help Save You Water

At Terry’s Plumbing, we like beautiful things. We also like plumbing fixtures, and award winning stuff, and we like anything that is environmentally friendly. So when we heard about this beautiful, environmentally friendly, award winning plumbing fixture, we got really excited. For this month’s post, we’re showcasing this brilliant faucet, called the Swirl, that’s been making a splash on various websites online.

It’s all about water conservation

You’ve surely heard that water conservation is of critical importance for environmentally concerned citizens, and will probably become more important in the coming years. After all, water is the linchpin of human existence, and is equally essential for the majority of plants and animals living on planet earth today.

The majority of the water in the world is either salty ocean water, or it’s permanently frozen. Less than 1% of the water in the world is actually drinkable for people. By 2030, it’s estimated that half of the human population will experience water scarcity, and already 780 million people in the world are living without access to safe drinking water. In the future, researchers and experts anticipate that we’ll be fighting wars with one another over the availability of water. Literally, fighting wars.

The spinning turbines are the key to it all

The Swirl faucet relies on spinning turbines to release jets of water in a vortex shape. Creating a stream of water with a hollow center, the spinning turbines spin in opposite directions, one clockwise and the other counter-clockwise. The Swirl has three different settings, and each setting creates its own distinctively shaped swirling water stream.

You can’t buy it yet, but hopefully you can soon

The Swirl faucet was designed by a student at the London Royal College of Art named Simin Qiu. He took two months to create the design for his faucet, but so far has yet to finish the prototype. One day, Simin hopes that his faucet will be a popular item in hotels and homes across the world. For now, it’s still too early to buy a Swirl faucet.

You can read more about it online

If you want to learn more about the Swirl faucet, it’s all over the Internet. Check out beautiful photos and hear more people singing its praises at these websites:

Keep your eye out for the Swirl faucet in stores and online. One day you may be able to purchase one for your own home.