No Water Pressure In Your Shower? Give It Superpowers Again!

Whether it’s a sudden change or a gradual change in performance, it can be really irritating when you’re not getting sufficient water pressure in your shower. But is it always necessary to call a plumber for what may end up being a simple fix? In this post, we’ll walk you through some common problems that cause low water pressure and how to give your shower superhuman strength again.

Take time to think whether the problem exists in all faucets or just that shower.

Is The Low Pressure In The Entire House Or Just The Shower?

The first thing is to determine whether the low pressure is limited to the shower or involves the entire home. Try your water pressure at different faucets. If the entire home has low pressure, you’ll need to look at different options, whether it’s blowing out the lines or more advanced tactics that require a professional touch. If it’s just your shower, that means the problem is localized and easier to troubleshoot. If your shower “squeals” at times, this can also be caused by restrictions to the water flow, another way to diagnose the problem.

Shower heads or low-flow filters that use less water are a great way to save water, but because they move water more slowly, it’s easier for sediment and debris to build up in the shower head, restricting flow further than it was designed for. Take the shower head off, run the shower for a moment to make sure you’ve got good flow, which verifies that it’s the shower head to blame. Clean out the shower head very well, including using a needle or wire to remove any sediment that has become lodged in the holes. Once you’ve gotten it cleaned out, reinstall the shower head and try the pressure again. If the problem persists, you may want to replace the shower head with a regular model.

If you have hard water, it can show up in terms of a white scale on your fixtures or a rusty stain. The scale can build up in and on your shower head, preventing the water from flowing freely through the shower head. After removing the shower head from the pipe, soak it in vinegar or another acid solution. You’ll see small bubbles form and fizz as the calcium in the lime reacts to the acid and bubbles away. You can soak the shower head for about 15 minutes for moderate scaling, or even overnight for more serious scale or if you suspect the inside of the shower head has buildup. Swishing the shower head around in the vinegar or pouring fresh vinegar through the pipe attachment end of it will help speed up the process by changing out the neutralized vinegar out for fresher and more acidic solution. 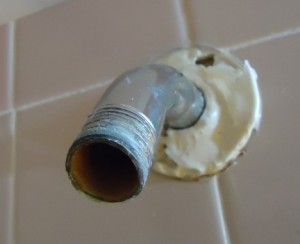 Try clearing any obstructions in the shower upflow pipe

Obstruction in the Pipe Or Head

Another possibility is that an obstruction can become lodged in the upflow pipe for the shower or in the shower head itself. Whether it’s larger sediment or something that was drafted along larger pipes only to become lodged in the smaller pipes in the shower, it will need to be flushed out to restore the lost pressure. If it’s in the shower head, see if you can knock it out by tapping the shower head’s back end against a firm surface a few times. If it’s in the pipes, you can try poking a straightened wire hanger back into the obstruction to knock it loose, but you may need to respond with stronger measures if this does not work, up to replacing the pipe itself.

If significant amounts of water are still passing out through the tub faucet when the diversion lever is lifted to send water to the shower head, the problem may be caused by a failure in the tub diverter. You can take apart the tub faucet to check whether washers, diverters and similar components are functioning properly, but if all else fails, changing out the tub diverter or the entire faucet should fix the problem.

If there still isn’t better pressure in your shower after applying these methods or you’re simply not comfortable working on your plumbing this way, it may be time to contact a professional. We’ve been serving the Pittsburgh area for over 25 years’ with our plumbing experience. Our 98% customer retention rate shows we do right by our customers.